On June 13, 1904, a white judge ordered a Black mother to brutally beat her 15-year-old son in front of hundreds of white people in the Lexington, Kentucky, town square. Judge John J. Riley imposed this sentence upon the boy, Simon Searce, as punishment for getting into a physical altercation with a white boy.

Compelled by the judge’s order, Simon’s mother took her son straight from the courtroom, through the crowded streets, and to the town square filled with white residents. There, her son was stripped of his clothing and tied to a post, and she administered 20 lashes from a buggy whip. If Simon’s mother had refused to whip her son as ordered, she risked facing her own charges of contempt, and also risked angering the judge who had power to impose an even harsher punishment upon her son.

This brutal punishment of a Black child was rooted in the prior era of enslavement. During that time, Black children, women, and men were whipped with impunity by enslavers and traffickers, leaving physical and emotional scars. Narratives of the experience of enslavement written by Black people who escaped bondage often described how white enslavers would cruelly force enslaved people to participate in the punishment of others. Forced to whip fellow enslaved Black people for running away, working too slowly, or other alleged offenses, these men and women were threatened with violence or death if they refused. For generations after Emancipation, white urban and rural communities alike witnessed and participated in the public spectacle of violent punishments inflicted upon Black people through racial terror lynching and deadly massacres targeting entire Black communities.

A narrative of racial difference—the belief that Black people were inferior to white people—was constructed to justify this treatment. That myth of white supremacy survived the formal abolition of enslavement and evolved to include the belief that Black people are dangerous criminals. Black people, even children like Simon, were frequently met with harsh and often violent retribution from courts after being accused of minor social transgressions, or for defending themselves against attacks from white people. Even white press accounts of Simon Searce’s punishment recognized the whipping scene’s roots in enslavement; one headline reporting the events declared, “REMINDER OF OLD DAYS: Negro Boy Whipped at Post in Kentucky for Striking White Boy.” 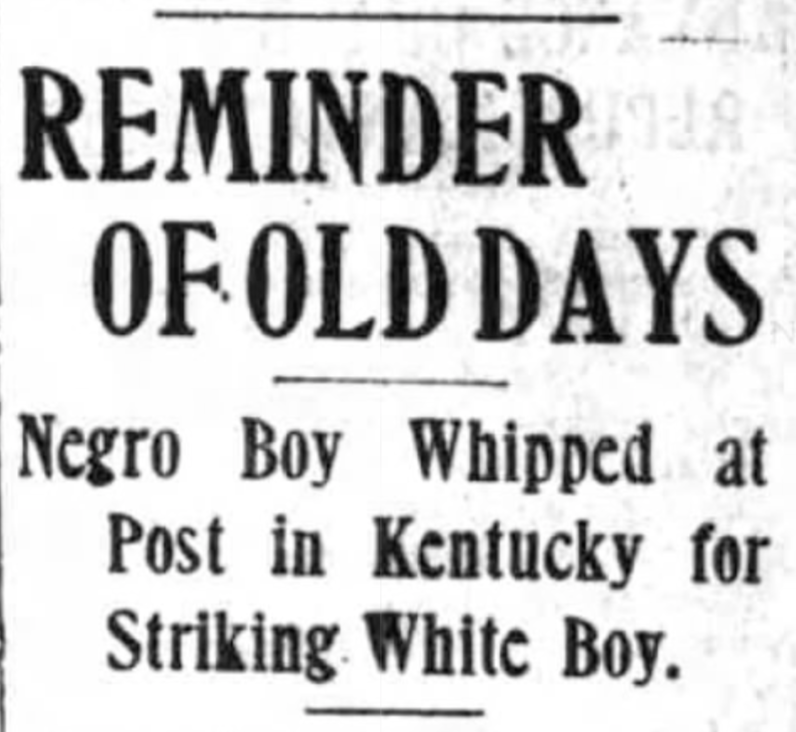 This presumption of guilt and dangerousness persists today and continues to make people of color vulnerable to racial violence, wrongful convictions, and unfair treatment. Our nation’s history of racial injustice has polluted the environment in which the criminal justice system is administered. Understanding how today’s criminal justice crisis is rooted in our country’s history of racial injustice requires truthfully facing that history and its legacy.