On July 15, 1954, at the direction of U.S. Attorney General Herbert Brownell and under the supervision of Immigration and Naturalization Service (INS) Commissioner Joseph Swing, the U.S. Border Patrol began the second phase of an immigration law enforcement initiative in the lower Rio Grande Valley of Texas. The program, officially known as “Operation Wetback,” employed the pejorative term “wetback” often used to refer to Mexican citizens who entered the U.S. by swimming across the Rio Grande River.

The operation had begun one month earlier, targeting Mexican immigrants in California and Arizona. Brownell promoted the crackdown based on his assertion that “the Mexican wetback problem was becoming increasingly serious" because Mexican immigrants were “displacing domestic workers, affecting work conditions, spreading disease, and contributing to crime rates.” INS deployed hundreds of agents to the Rio Grande Valley to locate and deport to Mexico anyone they suspected of being in the U.S. without legal status. The following September, INS initiated a similar operation in the Midwest.

Border agents' tactics included descending on Mexican American neighborhoods, demanding identification from “Mexican-looking” citizens on the street, invading private homes in the middle of the night, and raiding Mexican businesses. Without a hearing or oversight, agents often seized and deported people who were lawfully in the country. By the end of these crusades in California, Arizona, and Texas, as many as 200,000 Mexican immigrants had returned to Mexico—including many who were not undocumented, and some who were U.S. citizens. Some immigrants left on their own in the face of the large-scale harassment, but most were taken under border patrol escort.

By the end of 1954, according to some reports, INS had deported one million Mexican immigrants nationwide. These mandatory deportations were done at the deportee’s expense and cost some people all the money they had earned while working in the U.S. At the program’s close, Brownell praised the effort, which violently displaced hundreds of thousands of people from their homes, as a success. 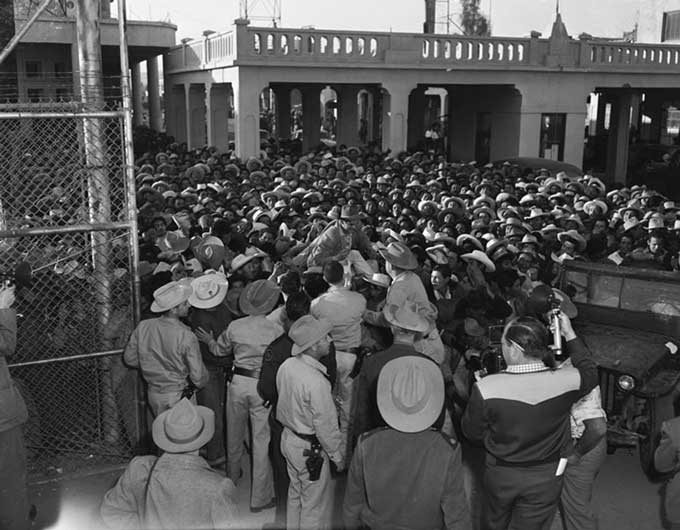