On December 1, 1955, Montgomery, Alabama, police arrested seamstress and activist Rosa Parks for refusing to give up her seat on a segregated city bus. Her stand helped spark the Montgomery Bus Boycott, which remains one of the most well-known campaigns of the civil rights movement. However, Mrs. Parks's work for racial justice long preceded this courageous act. She was very active in the local chapter of the NAACP since joining as the chapter’s only woman member in 1943, and had served as both the youth leader and secretary. Mrs. Parks frequently traveled throughout Alabama to interview Black people who had suffered racial terror, violence, or other injustices. In 1944, she investigated the Abbeville, Alabama, gang-rape of a young Black woman named Recy Taylor, and joined with other civil rights activists to organize a national campaign demanding prosecution of the white men responsible.

On the evening of December 1, 1955, Rosa Parks began her bus ride home from work sitting in the “colored section.” Montgomery’s segregated bus service designated separate seating areas for Black and white passengers; during peak operating hours, if the white seating area became full, the bus driver could expand its boundaries and request that African Americans stand to relinquish their seats to white people. While Black riders were not legally obligated to comply, city bus drivers were notorious for their hostile treatment of Black riders and their requests were rarely refused.

As more white passengers boarded, the bus driver asked Mrs. Parks and three other Black passengers who were seated to give up their seats to white riders. When Mrs. Parks was the only one to refuse, the driver summoned police and she was arrested. Mrs. Parks later recalled that she had refused to stand, not because she was physically tired, but because she was tired of giving in. That same night, Jo Ann Robinson and other local activists began organizing what would become the Montgomery Bus Boycott.

A statue of Mrs. Parks was dedicated in Montgomery on December 1, 2019, near the location where she boarded the bus on the day of her arrest. 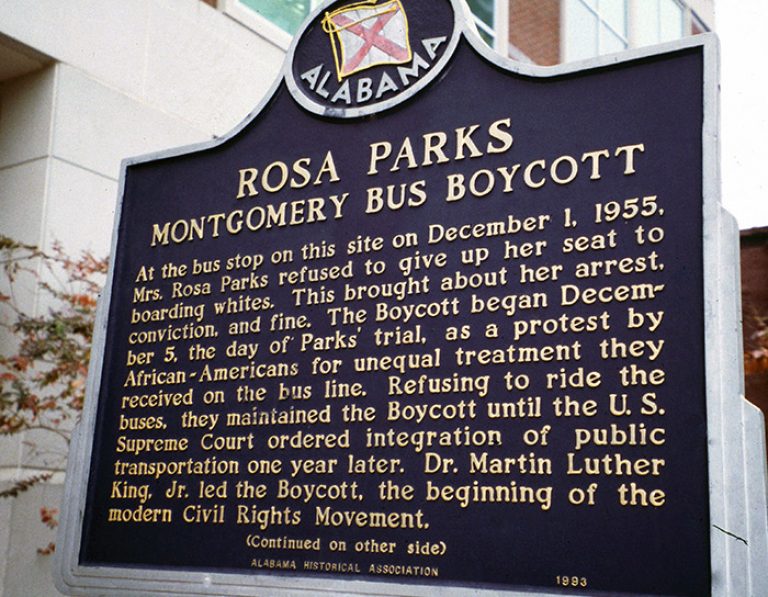