On April 20, 1965, an all-white jury acquitted Lester Maddox of all charges after the white man threatened three young Black seminary students at gunpoint for attempting to enter his racially-segregated Atlanta restaurant. The jury deliberated for only 47 minutes before returning its not guilty verdict.

On July 3, 1964, just one day after the 1964 Civil Rights Act was passed to prohibit racial segregation in public accommodations like restaurants and hotels, three Atlanta University Center ministerial students named George Willis Jr., Woodrow Lewis, and Albert L. Dunn met for lunch at the Pickrick restaurant. Before they could enter, owner Lester Maddox began yelling at them: “You no good dirty devils! You dirty Communists!” He then pulled out his pistol and pointed it at them, telling them “Get the hell out of here or I’ll kill you.”

Rather than help the three unarmed customers being held at gunpoint, the white patrons eating at the restaurant responded by grabbing “pickrick drumsticks”—pick handles Mr. Maddox kept hanging on his restaurant wall to intimidate Black community members. Mr. Maddox and the group of white customers then chased the three Black men out of the restaurant and into the parking lot, threatening them with violence.

Mr. Maddox later claimed he had pulled out his pistol in self defense, but no reports or evidence indicated that the young Black students were anything other than customers lawfully attempting to eat at the Pickrick, or that they had threatened him in any way.

After Mr. Maddox was arrested and released on $1,000 bond, white Americans from all over the country rallied to his support, endorsing his open defiance of the Civil Rights Act and demonstrating that acceptance and enforcement of the new law would take much more than a presidential signature. People ran ads fundraising for his defense fund and the restaurant saw an increase in white patrons. Mr. Maddox even began selling souvenir “pickrick drumsticks” complete with his autograph. 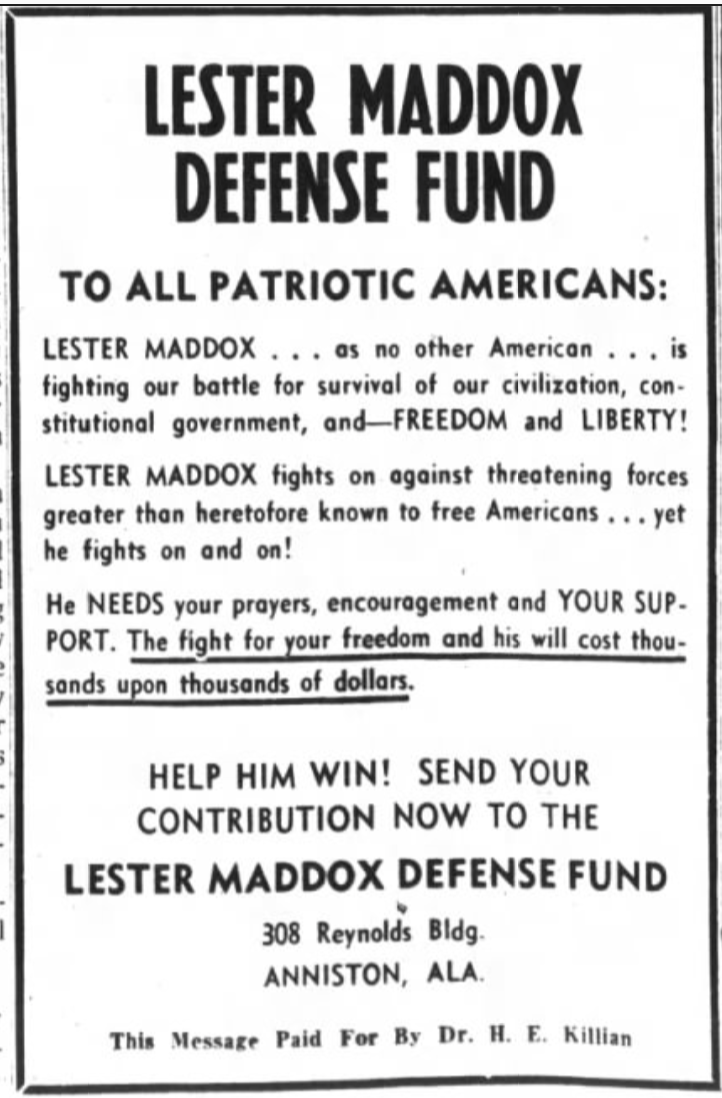 The Pickrick continued to refuse to serve Black community members, even as Mr. Maddox awaited trial. He vowed to close the restaurant before serving Black customers, and he did exactly that in February 1965, after a federal district judge ruled he was in civil contempt for continuing to violate the Civil Rights Act.

After his acquittal for threatening these Black men, Mr. Maddox capitalized on his increased notoriety and broad white support for his segregationist positions by mounting a campaign for Governor of Georgia the following year. With the KKK’s endorsement, he won. During his term in office, Mr. Maddox promoted a racist, segregationist agenda, vigorously opposed integrating Georgia public schools, and refused to permit Dr. Martin Luther King Jr. to lie in state after his April 1968 assassination.

As late as 2001, Mr. Maddox remained an advocate of racial segregation. “I want my race preserved,” he said in an interview, “and I hope most everybody else wants theirs preserved."

Elected and supported by the majority of white Americans, segregationists like Lester Maddox operated as private citizens and at the highest levels of government, wielding violence and criminalization to oppose the civil rights movement and target the courageous activists who fueled it. Read EJI’s report on Segregation in America to learn more. 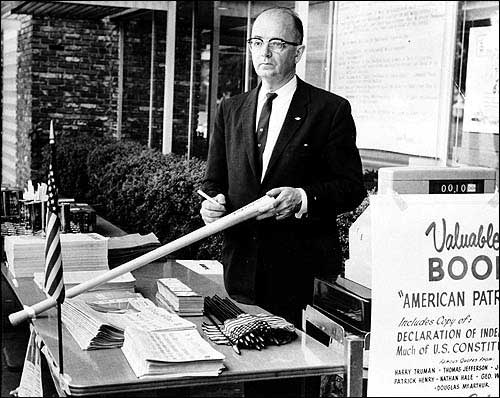 Lester Maddox autographs one of his signature "pickrick drumsticks."