On November 12, 1935, a mob of at least 700 white men, women, and children killed two teenaged Black boys—15-year-old Ernest Collins and 16-year-old Benny Mitchell—in Colorado County, Texas, in a public spectacle lynching. Afterward, officials called the lynching “justice,” and no one in the mob was punished.

In October 1935, a young white woman’s body was found in a creek near her family’s farm in Columbus, Texas. When local officials concluded she had been murdered, suspicion soon focused on Ernest Collins and Benny Mitchell: two Black teens who had been seen picking pecans near the same creek. During this era, the deep racial hostility that permeated Southern society burdened Black people with a presumption of guilt that often served to focus suspicion on Black communities after a crime was discovered, whether evidence supported that suspicion or not.

Law enforcement officers arrested Ernest and Benny and, soon after, reported that the young men had confessed to the crime. Black suspects in the South during this time were regularly subjected to beatings, torture, and threats of lynching during police interrogations. News reports eagerly reported Ernest’s and Benny’s alleged confessions as truthful justifications for the brutal lynchings that followed, but without fair investigation or trial, their supposed confessions serve as more reliable evidence of fear than guilt.

The boys were held in Houston after arrest until they had to return to Columbus for a trial on November 12. While the sheriff was transporting Benny and Ernest to the Colorado County courthouse, several cars filled with armed white men stopped them on a bridge crossing and demanded to lynch the two boys. The sheriff handed them over.

Immediately, the white mob brought Ernest and Benny to a live oak tree about a mile from the young white girl’s home and prepared to kill them. A crowd of at least 700 people gathered to watch and repeatedly “burst into jeering screams” as Ernest and Benny, who had been chained together by their necks, were led to the tree. Several members of the mob placed ropes around the boys’ necks and hanged them until dead.

The next day, the white community proudly boasted and praised the lynchings. The county attorney publicly said the lynching was “an expression of the will of the people” and a local judge called the lynchings “justice.” Several newspapers reporting on the lynchings printed an image of two local sheriff officials posing with one of the lynching ropes, and both ropes were exhibited in a local drug store. Local press was silent about the lynching's impact on the local Black community. Though the mob members and spectators were widely known, no one was immediately arrested or charged for their actions.

Since the end of Reconstruction in 1877, racial terror lynchings targeting Black communities had killed thousands of men, women, and children throughout the U.S., but repeated calls for a federal anti-lynching law had failed due to obstruction by Southern white lawmakers. In 1935, the same year that Benny Mitchell and Ernest Collins were lynched, the Costigan-Wagner anti-lynching bill was introduced in the U.S. Senate. Texas’s own Sen. Tom Connally opposed the bill, and claimed that states were capable of stopping lynching without “federal interference.” Within weeks of the lynchings of Benny and Ernest, the NAACP protested the lack of any state or local investigation and insisted it clearly showed that many states could not—or would not—act to stop the lynching of Black people. The bill ultimately failed, and the U.S. Congress never passed anti-lynching legislation during the 20th century.

Ernest Collins and Benny Mitchell are two of at least seven African American victims of racial terror lynching killed in Colorado County, Texas, between 1877 and 1950. No one was ever held accountable for their deaths. To learn more, read EJI's report, Lynching in America: Confronting the Legacy of Racial Terror. 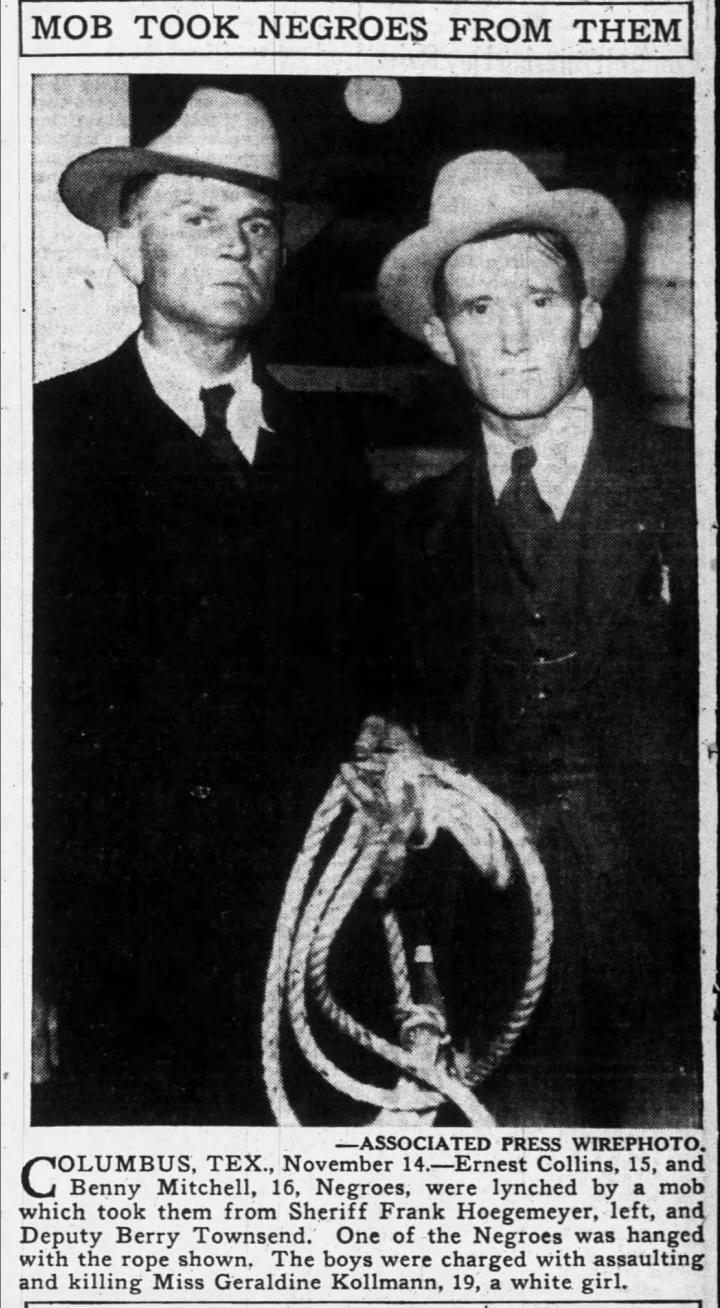