On March 25, 1931, nine Black teenagers riding a freight train through Alabama and north toward Memphis, Tennessee, were arrested after being falsely accused of raping two white women. After nearly being lynched, they were brought to trial in Scottsboro, Alabama.

Despite evidence that exonerated the teens, including a retraction by one of their accusers, the state pursued the case. All-white juries delivered guilty verdicts and all nine defendants, except the youngest, were sentenced to death. From 1931 to 1937, during a series of appeals and new trials, they languished in Alabama's Kilby prison, where they were repeatedly brutalized by guards.

In 1932, the U.S. Supreme Court concluded in Powell v. Alabama that the Scottsboro defendants had been denied adequate counsel at trial. In 1935, in Norris v. Alabama, the Court again ruled in favor of the defendants, overturning their convictions because Alabama had systematically excluded Black people from jury service.

Finally, in 1937, four of the defendants were released and five were given sentences from 20 years to life; four of the defendants sentenced to prison time were released on parole between 1943 and 1950, while the fifth escaped prison in 1948 and fled to Michigan. One of the Scottsboro Boys, Clarence Norris, walked out of Kilby Prison in 1946 after being paroled; he moved North to make a life for himself and did not receive a full pardon until 30 years later. 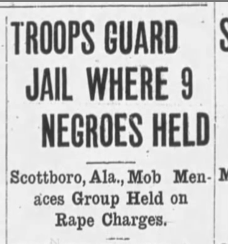