On July 29, 1880, nearly 15 years after the abolition of chattel slavery in the U.S., a Black woman named Nancy Williams published an ad in The Christian Recorder, a Philadelphia-based newspaper, seeking information about her two daughters, who white enslavers had sold away from her in 1860 while she was enslaved in Missouri. Ms. Williams was among the thousands of formerly enslaved people who submitted pleas to newspapers throughout the country after emancipation, seeking information about spouses, parents, and children they had been brutally separated from through enslavement.

The threat of being ripped apart from loved ones was an ever-present fear for enslaved families. Countless parents like Ms. Williams were traumatized by the torture of being pulled away from their children and families, which created immeasurable grief and despair. Though many formerly enslaved people retained hope and worked hard to reunite with their relatives—even after decades apart—very few succeeded in locating their loved ones.

Ms. Williams’s July 29 ad was titled “Information Wanted of My Children.” The ad explained that in 1860 in Missouri, a man named Jacob Certain sold her to a man named Buren Wardell, who lived in Memphis, Tennessee. Ms. Williams’s ad also shared the ages of her daughters when she was taken from them: Millie, the oldest, was nine years old, while Mary was six years old. “It will be twenty years in October since I saw them,” Ms. Williams wrote, “and I would be more than glad to hear from them.”

Approximately half of enslaved people were separated from a spouse or parent during the Domestic Slave Trade. Enslavers focused on enslaved peoples’ profitability, ignoring their humanity and roles as family members. The desire for money and power, which fueled the slave trade in the U.S., led to the particularly cruel practice of separating children from parents. Teenagers and young people were valued for their strength, vigor, and the amount of work that they could perform, rather than their identities as sons and daughters, brothers and sisters, or mothers and fathers.

The Legacy Museum: From Enslavement to Mass Incarceration explores the devastating history and continuing impact of the Domestic Slave Trade in Alabama and throughout the country, including the inhumane separation of loved ones like Nancy Williams and her daughters. To learn more about the history of slavery, read EJI’s report, Slavery in America: The Montgomery Slave Trade. Explore more of the ads like Ms. Williams’s, published after emancipation, here. 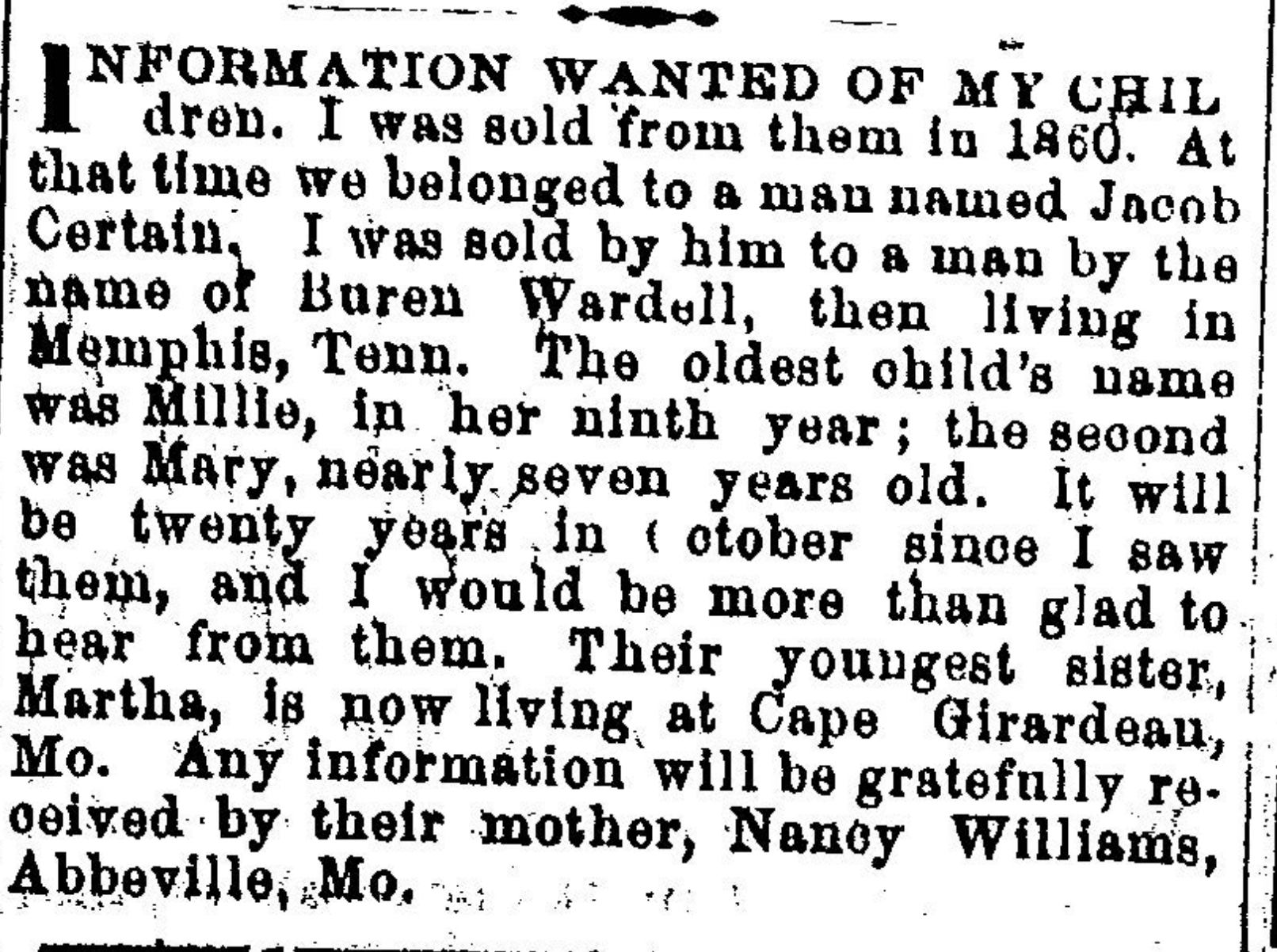