In the early hours of the morning on April 5, 1880, Cadet Johnson Whittaker, one of the first Black students in the U.S. Military Academy at West Point, was brutally beaten by white cadets while sleeping in his barracks. Three white cadets ambushed Cadet Whittaker, slashed his head and ears, burned his Bible, threatened his life and then left him in his underwear, tied to the bed and bleeding profusely.

Born enslaved in South Carolina in 1858, Cadet Whittaker received a Congressional appointment to the U.S. Military Academy in 1876. For most of his time at West Point, Cadet Whittaker was the only Black cadet at the institution; he endured social exclusion and racial terrorism perpetrated at the hands of white cadets and faculty alike. Twenty-three Black cadets attended West Point between 1870 and 1890, but due to the violent discrimination that they faced, only three graduated. Cadet Whittaker would later testify that he had “read and heard about the treatment that [Black] cadets received there, and expected to be ostracized.”

After Cadet Whittaker reported to West Point administrators that he had been attacked, the institution opened an investigation into him, and declined to hold his white attackers accountable. Administrators instead claimed that Cadet Whittaker had staged the attack to get out of his final exams, and in May, a West Point court of inquiry found Cadet Whittaker guilty of that charge. He was forced to take his final exams while incarcerated and withstand court-martial proceedings in New York City where the army prosecutor repeatedly referred to Black people as an “inferior race” known to “feign and sham.”

Johnson Whittaker went on to work in several professional fields and raise a family, including several generations of descendants who served in the U.S. military. In 1995, more than 60 years after his death, Mr. Whittaker’s heirs accepted the commission he would have received upon graduating West Point. At the ceremony, President Bill Clinton remarked: “We cannot undo history. But today, finally, we can pay tribute to a great American and we can acknowledge a great injustice.” 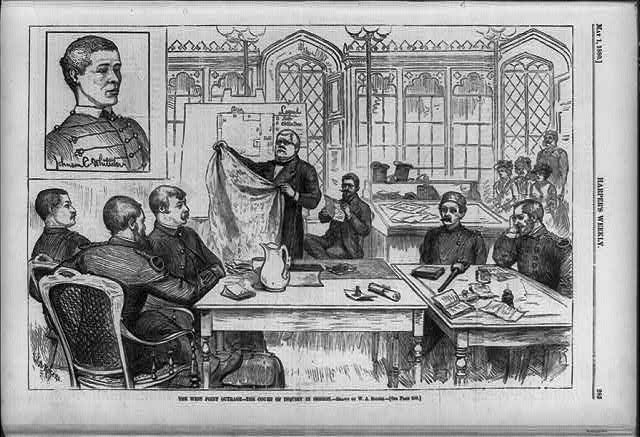 Portrait of Cadet Whittaker at the court-martial proceedings. (Library of Congress)