On September 4, 1875, Republicans in Hinds County, Mississippi, held a barbecue and meeting in the town of Clinton that was attended by 3,000 people. Hoping to curb the risk of violent political conflict, Clinton authorities appointed special police and prohibited serving liquor. When the Republican speakers began making their political speeches in the afternoon, Democratic party representatives unexpectedly joined the meeting and requested speaking time.

In the aftermath of the Civil War, the Republican Party of Abraham Lincoln was the dominant political wing of the federal government working to restore national unity and enforce the new civil rights of Black people, while the Democratic Party largely represented the white South of the former Confederacy intent on regaining control of their state governments. The "Radical Republicans" were an arm of the Republican Party that advocated imposing severe penalties on the South for waging the Civil War and also ensuring full political and social equality for the millions of Black people in the South who were now American citizens.

Political realignment during the civil rights movement of the 1960s led to major shifts in party identification, as Southern elected officials and constituents largely left the Democratic Party in protest of civil rights advancements enacted by President John F. Kennedy and President Lyndon B. Johnson, while the Republican Party stayed silent on civil rights issues to attract the defecting South, and later embraced the coded language of "law and order" and "state's rights" to dominate regional politics. But in 1875, Republican politicians in the South—a small minority—were considered agents of federal oppression, friends of African Americans, and enemies of the white supremacy many former Confederates wanted to re-establish.

At the Clinton, Mississippi, barbecue on that September evening, the risk of violent conflict between the political parties was great. In the interest of keeping the peace, Republican officials agreed to accommodate Democrats' request to speak and arranged for a public discussion between Judge Amos R. Johnston, a Democratic candidate for state senate, and Captain H.T. Fisher, Republican editor of the Jackson Times.

Both speakers were to be given an equal amount of speaking time, and Johnston spoke first. When Mr. Fisher's turn came, he expressed optimism that meetings between the parties could take place peacefully in the future—but eight minutes into his address, an altercation erupted in the crowd. A gunfight between Black and white people in the audience rang out, as bystanders panicked and rushed to escape the danger. Within 15 minutes, three white people and four Black people were dead, and six white people and 20 Black people were wounded.

Though newspapers reported that the Black people who had fired weapons were acting in self-defense, many white observers were enraged by the Black show of force. That night, armed white men from Clinton and Vicksburg formed roving bands targeting Black men. By the next day, an estimated 50 Black people had been killed. Many more had been forced into the woods and swampland to avoid an attack, where they remained until the attack subsided. 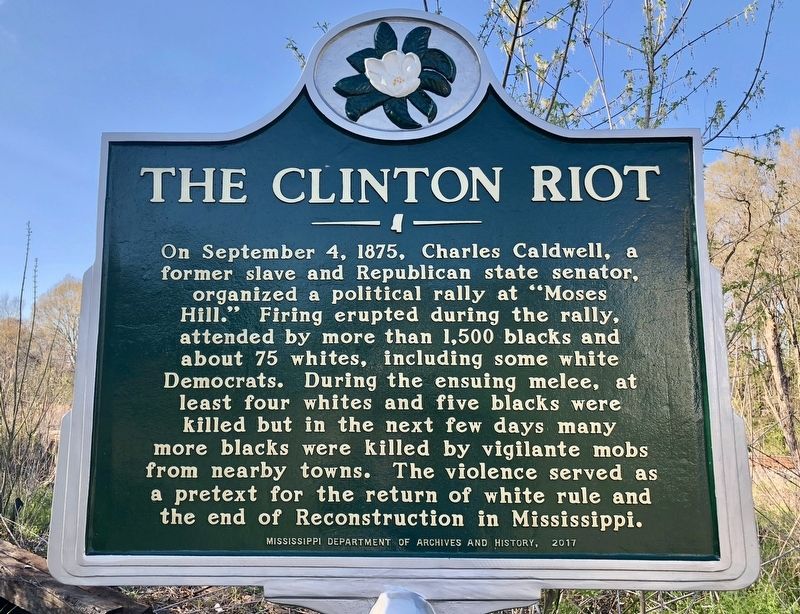