On November 28, 1933, a mob of 7,000 white men, women, and children seized an 18-year-old Black man named Lloyd Warner from the jail in St. Joseph, Missouri, hanged him, and burned his body in a brutal public spectacle lynching.

Just hours before, news spread that a Black man had allegedly assaulted a white girl. Mr. Warner was quickly accused of being the perpetrator, arrested, and placed in jail. As was typical of the era, the mere accusation that a Black man had sexually assaulted a white girl aroused a violent white mob that gathered outside the jail armed with ice picks, firearms, and knives. Mr. Warner professed his innocence to a court-appointed lawyer who remained at the jail with him, but the threat of lynching grew.

Outside, the crowd swelled to 1,000 people, and the state governor deployed National Guardsmen, allegedly to quell the mob. For at least three hours, in a standoff with local law enforcement and national troops, mob members demanded the sheriff turn over Mr. Warner. Neither the National Guardsmen nor local law enforcement took actions to defend the jail or dispel the mob, even as mob members smashed jail windows and attempted to knock down the jail door.

Instead, around 11 pm that evening, the sheriff announced that officials would turn Mr. Warner over if the mob would cease the attack on the jail and leave other prisoners unharmed. To prevent “further property damage” to the jail, the sheriff abandoned his duty to protect Mr. Warner from lynching.

Once the mob was permitted to enter the jail, several white men descended upon Mr. Warner, beating, choking and stabbing him. One member of the mob halted the assault on Mr. Warner, stating that he wished to “make this Black boy suffer” before he died. At this request, the mob dragged Mr. Warner down the street, attracting larger crowds that included women and children.

The mob hanged Mr. Warner near the courthouse, then drenched his body with gasoline and set him on fire. Newspapers reported that three children had climbed the tree to fasten the rope that hanged Mr. Warner and, in jumping from the tree, hoisted Mr. Warner’s body in the air. Before Mr. Warner’s body was burned, members of the crowd cut pieces of his leather belt and pants as souvenirs. For two hours, the mob that had by then grown to 7,000 people watched Mr. Warner burn; some witnesses even said that he may have been alive when he was set on fire.

In the wake of Lloyd Warner’s lynching, the white girl he had allegedly attacked reportedly told several newspapers, “they might have gotten the wrong one.”

No one was ever prosecuted or held accountable for the lynching of Mr. Warner. He is one of over 6,500 Black women, men, and children killed in racial terror lynchings in the U.S. between 1865-1950. To learn more about racial terror lynching, read the Equal Justice Initiative’s report, Lynching in America. 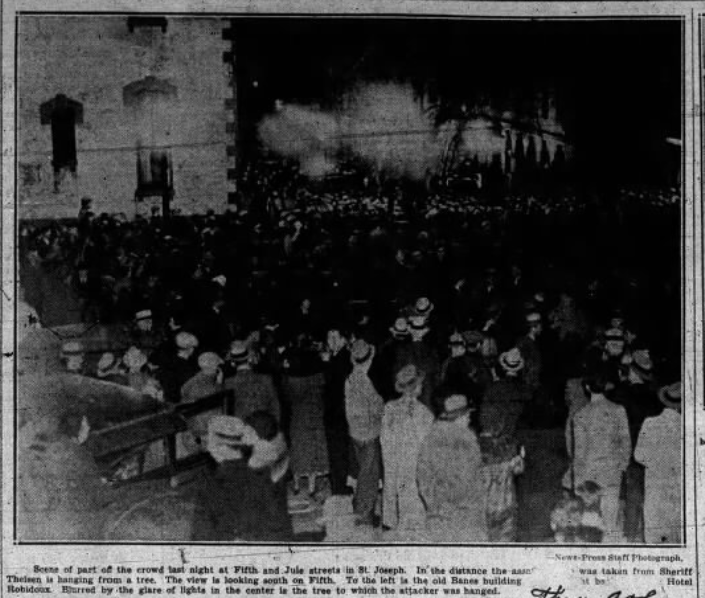