On April 13, 1873—Easter Sunday—a mob of hundreds of white men killed an estimated 150 Black people while attacking the Grant Parish courthouse in Colfax, Louisiana. Many of the Black victims were murdered in cold blood after surrendering. Only three white men died.

The Colfax massacre was precipitated by the hotly contested 1872 Louisiana gubernatorial election. During the Reconstruction era, as many newly-emancipated Black Americans began mobilizing and participating in politics, white communities determined to reinforce white supremacy began terrorizing Black people through acts of brutal violence.

After the 1872 election, when a federal judge declared William Kellogg the winner, he began making appointments to fill local parish offices. Meanwhile, Kellogg’s white supremacist opponent John McEnery and his supporters declared McEnery the winner of the election. In the ensuing unrest, Black voters who supported Kellogg staged a peaceful occupation, surrounding the Grant Parish courthouse and other municipal buildings in Colfax to prevent McEnery's supporters from taking them over.

In response, more than 300 armed white men attacked the courthouse building to forcefully remove Kellogg's Black supporters. When the white mob aimed a cannon to fire on the courthouse, some of the 60 Black defenders fled; others surrendered then, and more surrendered after the courthouse was set on fire. Many surrendering, unarmed Black men were nevertheless shot and killed by the white mob—some while fleeing.

After the massacre, the federal government indicted over 100 members of the white mob under the Enforcement Act of 1870. The law was specifically enacted during Reconstruction to protect newly freed Black voters from the terrorist threats of the Ku Klux Klan and other disgruntled white southerners. Only three members of the mob were convicted, and they appealed.

On March 27, 1876, in United States v. Cruikshank, the Supreme Court issued a ruling dismissing charges against the three white men. The Court held that the Fourteenth Amendment was only a protection against state actions, and did not empower the federal government to punish the acts of one citizen towards another not clearly motivated by racial animus. In the eyes of the Court, racialized political violence did not qualify.

The Cruikshank decision severely limited the federal government's authority to legally enforce Black civil rights and protect Black citizens from racial terror at the hands of mobs intent on restoring white racial dominance in the post-civil war South. As a result of the decision, white terrorist groups continued to repress Black Americans’ rights through voter suppression and acts of terror and violence.

To this day, the historical marker on the site of the Colfax massacre refers to it as the "end of carpetbag misrule in the South." 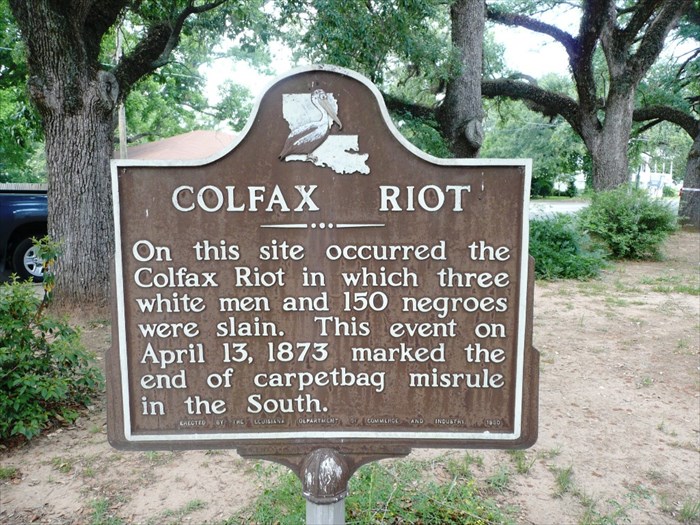